What Happens When You Give Kids Homeschooling Freedom

Today I want to tell you a story about the day we took off school...or so I thought. I thought I was giving my kids a break from school while I attended on online conference. Instead, I learned what happens when kids get a little freedom and space.

Here is the transcript:

Well, Hi there, it's Kelly Harbaugh with Working Homeschooler. And today, I want to tell you a story. It's a story about a day that I thought we were taking off of homeschool. But it turned out I couldn't keep homeschooling from happening.

So here's my story. It was still my first year of homeschooling, I had a fourth grader and an eighth grader, and it was early spring, about the time that the homeschool conferences all start coming out. And there was an online conference that I really wanted to attend. It had a lot of great speakers, a lot of great topics that I just knew would be helpful to me. And it was during the day on a weekday, so it would conflict with what would normally be a school day. And rather than trying to work on my kids work around things while I was trying to watch the conference session, I decided I was just going to give them the day off, free time to do whatever they were wanted to do and that way I could stay fully focused on the conference.

And that's what I did. They were in earshot, if they needed anything, but to be honest, they were quiet all day and I was laser-focused on that conference all day. I took lots of great notes. I downloaded every freebie I could. I just took in every bit of advice that I could because I was still so new at this and just looking for any guidance I could possibly get.So what happened when the conference was over? Well, first, I went upstairs where my daughter was in her room, and I went into check on her. What I found was she was placing the finishing touches on a craft project. This was one of those kits - a little bit more of an advanced kit - I can't - I think it was a jewelry box. That's what I'm picturing in My mind, but to be honest, it was so long ago, I could be getting that wrong. But it was some type of kit that she just happened to have. I think it was maybe a birthday gift or Christmas gift that she just hadn't used yet. And apparently, she had decided to get this craft kit out, just open up the directions, read it, follow them and put the whole thing together and, you know, do all of the decorating and everything.
And so I was just shocked to find that she had just done everything from beginning to end, had gotten it all right. And it looked great. But not only that, she had for some reason taking a notebook and copied all of the directions, all of the steps, which I had already learned was "copy work", because that teaches kids spelling and grammar and punctuation, that the copy work was good practice.

So I had looked at what she had done that day and I thought, "Wow actually got a good battle score done today." And that was a great accomplishment, her figuring that out on her own. And I was happy to see that. And to be honest, if either of my kids were going to do that, it would probably be, my first guess would be my daughter because she just, she is my compliant child. And she's always been the one who would just do anything that I assigned her and I thought, well, she was probably looking for something to do for school that day, because that's what she's used to. She was, you know, very much creature of routine.So, I honestly didn't expect to find the same thing when I talked to my son, only because he wasn't the type to just go try to do school work on his own. He was a social bug. He had lots of friends even to this day. He's always been somebody that anybody can have a conversation with. He can make anybody feel comfortable. He's always been able to have very adult conversations with people, even from a young age. But he's not the type to just say, "I'm going to go study something today" or "I'm going to do school even though I'm off of school."

So I actually think I remember him coming down into the kitchen with a book in his hand, and telling me that what he decided to do that day was read a biography that he had, I honestly think, you know, I think this was early spring, or maybe February, just a couple of months after Christmas. So this was something that he had as a gift that he had not opened and read yet. But this was an actor that he admired. And he had this biography. And so he actually sat on his free time that day, and decided to read most of that book. So that was really encouraging to me to begin with. But here's the thing. He didn't just read it. He really got into it. He really absorbed it. And he really thought about the things that he read about this person's life and He - this person was an immigrant. And so he talked to me about what he learned about what that person came from and what they encountered when they came to our country. And we got into discussion about the difference between governments there and here.

I remember, again, just like I think my daughter did the jewelry box. I can't remember every conversation, but I remember walking away from that string of conversations in the kitchen with my son and thinking, "We just had three separate, really good educational conversations from that one book he read today." And that was more in-depth, and he probably learned more than any lesson that I had planned and taught in the last two weeks. And so when I was alone again, I just stood there and thought about what I had just witnessed and it really started to sink in.

I think this was one of the first times that I really started to see the evidence of things that homeschool leaders had been telling me for months and months. Sometimes we have to see it for ourselves. And what I'm talking about is the fact that our kids really do have initiative to learn things. But especially if they've spent time in school, and especially if we grew up in school, we have a hard time undoing that mindset that education means "I'm going to tell you everything you know, you need to know, and dump it into your brain." And what I've learned along the way, that was one of my first realizations, but what I've learned from many similar experiences along the way, and failures from not believing it wholeheartedly as I moved along, is that there is so much value in giving kids even a little bit of freedom to pursue their interests and to just support that with as much information as possible so they can learn as much as possible while pursuing those interests.

Now, does that mean we scrapped all of our workbooks and our curriculum and just started having a free-for-all every day? No, we didn't, we still stuck to our curriculum. But over time, I started to learn the value and giving them a little freedom to choose some things, giving them some free time in the day or even a day a week. I know this works successfully for a lot of people to give their kids like a free day to study whatever they want during that day. Or all the way up to some people who do unschooling and a lot of people really misunderstand what unschooling is, but it's really child-led learning and it really does involve the parents a lot because you're having to sit down with your child on a regular basis and set goals and make sure you're providing what they need to meet those goals. It really is an educational experience.

That's not the right experience for everybody. But my point is that any bit of freedom, whether it's one subject or a couple hours or a day or all the way to complete child-led learning, your kids are going to get the most in-depth education from those times. And you are going to learn about your kids and what they need and what their strengths are and what they do well and what their interests are. When you allow time, some space for them to have nothing assigned and decide on their own what they're going to pursue.
I wish I could say that from this one experience I completely learned that lesson and, and I was very good at doing that through the rest of our homeschooling journey.

But the truth is, it took a lot of learning and a lot of swinging back and forth between the trusting and feeling like I had to be doing something different. It was a lot of give-and-take and learning over the years. And I hope to be in the coming week sharing with you many of the things that I learned and what I would do differently.

But I will say that it was a blessing to be able to learn to let my kids lead some in the education process, and that you shouldn't be afraid to do whatever bit whatever length of time you feel comfortable putting that into your schedule, even if it's a little bit in the beginning and you surely slowly expand that. Don't be afraid to listen to your kids. And pay attention to your kids as much as or maybe more than you pay attention to the curriculum guides and the homeschool method gurus, and all of those other articles and things that you read that tell you, you know, what their version of the right way to homeschool is.

You need to also recognize that your child is an individual, and watch the way they learn. And think of the ways that you can support them through that process. And believe me, they are going to really absorb and become the people God made them to be when they have the freedom to figure that out and discover it. So don't be afraid to relax a little and give your kids a little bit of freedom.

Have a great weekend!

Now you can get an entire bundle of resources designed to help working parents get started and stay on track homeschooling.

See what's in the bundle 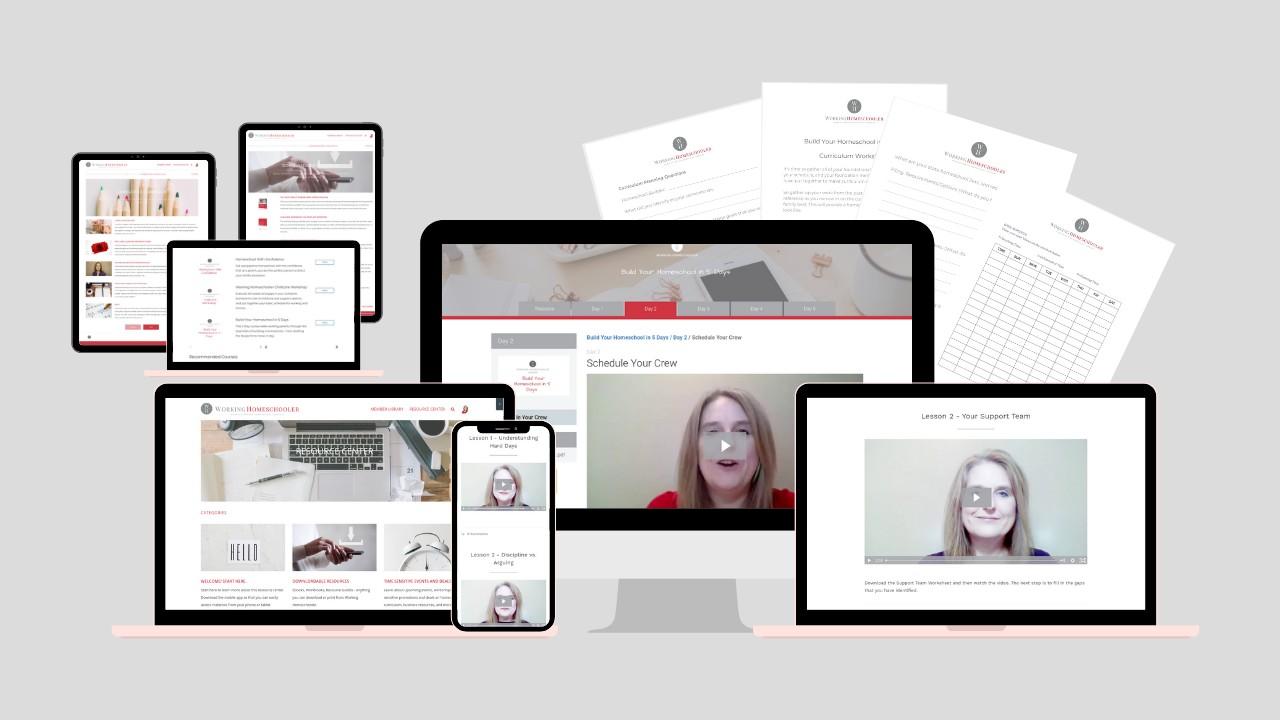